It is two o’clock in the morning and I am lying on on a concrete runway in Madrid on the sleeping bag I brought all the way from Whitley Bay. I am with one of my good friends from school who I have known for almost a decade, friends I have met over the last two years working with CAFOD and YMT, and people I have only just met this week, and even just this evening. If I am to describe it as one of the most surreal experiences of my life, I wouldn’t be exaggerating.

We arrived this afternoon prepped for the overnight vigil expected to have over a million young people attending. When we arrived, we weren’t quite sure how we were going to survive the night. The temperature was at least 41℃ and it showed no signs of cooling. I was confused – people were risking their lives. We saw one young person being taken through the crowds in a fire engine to get to the nearest first aid tent. I couldn’t understand it; surely Pope Benedict would not want people putting themselves in danger just to get a glimpse ?

As the day went on, we managed to find a spot near the back of the airfield as our allocated area was too full. We pitched our sleeping bags, and with the help of a few kind Italians some donated tarpaulin, and sat down on the concrete runway ready for the night ahead. And it was as soon as we sat down that the clouds came over and the weather suddenly began to change. Just in time for the Pope’s arrival, it began to cool down and we could enjoy the surroundings and the camaraderie between our group from Hexham & Newcastle and the group of Canadians from Vancouver who were next to us.

When the Holy Father arrived, the heavens opened and we were treated to a thunderstorm. We had to cover our rucksacks with the tarpaulin we were given and use the remaining sheet for cover. It was like something out of a blockbuster film – the wind was blowing through everybody’s hair; shouting at each other to be heard. People were running frantically up and down the runway to get back to their groups to shelter – it actually made for entertaining viewing, if only we weren’t soaking wet ourselves, shivering as the temperature got cooler and cooler. There was a point during the storm where we started to sing the Newsboys song “Glory, glory, hallelujah, He reigns!” and all the other songs and hymns we knew that had the word “reign” in them. God must have heard our singing, as shortly after the rain died down and the Blessed Sacrament was brought out for adoration, the atmosphere changed entirely. 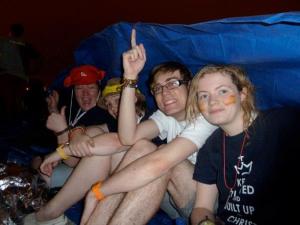 We were sat fairly near the back, and were unable to hear (or understand) any of what Pope Benedict was saying to the young people. But when Christ was brought out in the gigantic, pure gold monstrance (which we had visited earlier that week at its home in the Cathedral in Toledo) all the pilgrims, which by the end of the vigil was estimated to be around two million, fell into silence to pray in front of the Blessed Sacrament. And then it dawned on me that people weren’t there to glimpse the Pope at all. We were there to unite in solidarity with the hundreds of thousands of other young Catholics to have an encounter with God, to walk with Christ through the testing weather conditions, the airfield covered in ant nests, our hard concrete bed for the night… suddenly, none of these worries mattered anymore. What was important was sharing this experience together, and filling ourselves with joy, love and unity so we could come home and share what a touching experience it really was.

Throughout the evening, you could walk up and down the runway and feel like you were in a carnival. African dancing, Spanish singing, Chinese lanterns, English conversations; every nationality under the sun was there that night celebrating their culture, celebrating their faith. I enjoyed closing my eyes, and simply listening to what I could hear around me; appreciating the richness of our one world.

Pope Benedict summed it up the best when, deviating from his pre-written homily, he told the crowds of young people that “your strength is stronger than the rain”. Experiencing the tranquillity and peace during the Blessed Sacrament and being surrounded by pilgrims from all over the planet battling together through the extreme weather conditions really speaks to me that God will be with us no matter what the weather is like, no matter what our situations are in life, no matter how stormy things get. He is alive and present in our Church, in our communities, and in our young people.

He is with us always.