It’s been a really interesting week in Tabora trying to get everything set up and ready for the library which we’re hoping to open a week on Friday (August 24th). With the help of a very kind local named Amrat, who is in Tabora on official government business, we have been able to haggle our way down our prices in order to provide for the library in a way we could only have dreamed of than if we were trying to buy things as regular “wazungu” (white men).

The highlight of the last 10 days was definitely seeing our shipment of books arrive from Dar es Salaam which seemingly took a lot longer to arrive than we were expecting. The truck arrived at Tabora Girls School (a school who has worked closely with READ International in previous years) where we were given the help of the girls to carry the boxes and help arrange them into subject areas. It is curious as to why Tabora Boys wasn’t chosen as a storage location as many of the girls decided it would be better for their biceps to simply drop the heavier boxes anywhere in the classroom (near the door) rather in their appropriate sections. 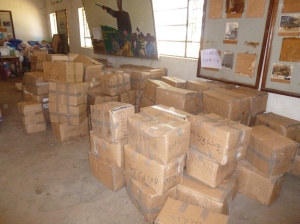 But at last, the books are here! There have been a couple of hiccoughs as we somehow received boxes from other projects and a few of our boxes didn’t make it but we are just happy that now we can begin to allocate the books which we have spent so long collecting back in the UK.

Over at the library at Isevya Secondary, we have been facing some challenges of a different sort. Due to the census taking place, as predicted, we have struggled to interact with students in a way I was truly hoping. Yesterday we arrived ready to paint the library, only to find out the fundi (handyman) had done it all for us, thus missing out on a key interaction with students.

It has proven much more difficult to get students involved than I was anticipating. On one hand, the library is progressing very well; our shelves are finished tomorrow, the walls are painted and the windows are in. On the other hand, we have failed (so far) to engage with enough students for them to feel like they have ownership over the project.

We are here for another three and a half weeks, so by putting extra advertisement in school and around the place, we will be able to have some fun with the young people and get them up to speed with the renovation, which in fairness, has been designed based on the ideas which came from a group of students gathered at the beginning of last week.

No matter what, we are still making a difference in the community and I know that once the books move into Isevya, they will attract the curiosity of students enough to get them involved with the library. A few young people have even already asked me to help them with their maths homework, so there’s always that!

4 thoughts on “There are always challenges…”