Seeing the students sitting on the striped mat in the ‘chill-out corner’ of the Isevya Secondary School library whilst reading physics, geography and mathematics text books really helped me put the last 12 months into perspective. Looking around I stared at the Tanzanian mural which had only been a blank wall five days previous, I saw the lino on the floor which had been painstakingly nailed and glued down the previous afternoon and groups of young people were standing next to the newly filled bookshelves flicking through textbooks we had brought from the UK.

been a long week in Tabora preparing for the grand opening ceremony of the library. At the beginning of the week, and since my last blog entry, we had only paint on the walls, and cement on the floor. By Wednesday, the “2 Mihuri Boys Painters” had completed the mural of Tanzania we had commissioned and time was truly ticking as we still needed to allocate our books to Isevya and pick up our bookshelves.

Time management is really quite difficult here in Africa. It’s easy to make an action plan of jobs to do, but when time isn’t on your side you can be guaranteed things will happen six hours later than you absolutely need them to. Thursday evening saw us still not have the shelves in the library, and once they were in, it was a mad dash to stock the shelves with our books; we never seem to learn to plan ahead of ahead. Fortunately, we have made some lovely friends at the Golden Eagle Guest House where we are staying, and we were able to draft them in to help as well as a surprise cohort of students who suddenly appeared in the right place at the right time. 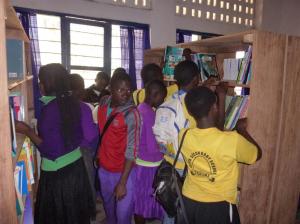 And so we opened the school library yesterday morning, and after three weeks of serious ups and downs it was all worth it. We were joined by the headmaster, a couple of teachers, the District and Regional Education Officers, as well as the local and national news reporters (our faces could have been broadcast over the whole of Tanzania by now for all we know!). We also had about fifty students who were able to see an atlas or flick through a novel for the first time in their lives. Young people milled around for the whole morning, filling the library with an electric atmosphere that the room may never have seen before. One boy, a Form III student named Casper, thanked me for helping bring their library alive once again, a word which captures perfectly for me the feeling of the new library: ALIVE!

For every READ International volunteer who may read this entry, for any school teacher who may have donated books from their school, and for those who may have given any money to our cause in the past year: a HUGE thank you! I was asked to pass on the greatest thanks to everybody back in the UK from all of those at the regional education office because the resources and environment that READ has provided wouldn’t have been possible without the work of volunteers in the UK. Looking at the work READ has carried out in Tabora in previous years has seen a visible increase in exam performance and prospects for their young people, so by continuing to support and volunteer at university is genuinely making a difference to the lives of these inspirational young people who are poised to become the next doctors, scientists and politicians of Tanzania.

Our last two weeks in Tabora will see us working with students to help them get used to the idea of having a working library in school. We hope to take some of the young people to the local regional library to get a feel for how a referencing system and how a library should function. It has been a real pleasure to work with such fantastic young people once more and I am really looking forward to getting to know more students now that the physical work of the library is complete.

It has been difficult, as evidenced in my previous blog, but I feel deep down that the extent of the impact that READ has across the whole of Tanzania is something I will never fully appreciate. I can’t know exactly how students will perform once we leave Tanzania or whether they will enjoy sitting in the ‘chill-out corner’ whilst reading some fiction. But one thing is for sure; that providing or sorting one textbook back in Edinburgh changes the life of a Tanzanian student forever as it is helping to unlock the potential of each and every person, enabling them to go on after they leave school to big and bright things helping them to ultimately reach for and achieve all of their wildest dreams.