Overlooking the shimmering waters of Subic Bay stands an ordinary building with an extraordinary history. Sitting atop one of the many hills here in the mountainous region of Zambales, the Preda centre is the headquarters for the organisation I have been lucky enough to volunteer with for the last four weeks. It actively works with 58 professional Filipinos and volunteers to protect and defend the rights and dignity of women and children who have been victims of forced prostitution, sexual abuse or inhumane jail conditions.

The PREDA team are working tirelessly to rescue children and teenagers from the sex trade and defending them by offering legal assistance to convict their perpetrators. Staff also offer education seminars for local elementary and high schools where they teach students, staff and parents about issues of sexual abuse and the urgent need to protect children and take action against abuse and exploitation.

Aside from the inspiring work they do with the victims of sex crimes, PREDA also take in boys who have been in conflict with the law or have been abandoned by their families. More often than not, these boys are put into government care (which is usually oversubscribed) and forced to live in the squalid conditions of detention centres. If they are over 15 years old, they may be forced to stay there as they await their trial or if they are under 15, until they are transferred into the hands of other child care organisations.

The children in conflict with the law (CICL) are victims themselves of broken homes, parental abandonment and will often turn to petty stealing to survive. Some of the children in the home are caught up in overlong legal trials where they have been involved in petty theft. On Wednesday, I was able to join the Home for Boys team with PREDA social worker Joan on a visit to Manila to attend the trial of one of the boys, visit the homes of some others and pick up new children due to move to the Boys’ Home here in Zambales.

We started our day at 4 am and headed towards the big, bustling city of Manila. If you’ve ever referred to London as ‘The Smoke’ you’d never use the term again after spending just a few hours in Manila. The air is thick with smog and pollution as a result of thousands of diesel powered cars, jeepneys, buses and tricycles which spend most of their driving time waiting in traffic. The sweet smell of garbage, fumes and the ‘biologically dead’ Pasig river lingers in the air and the sticky heat causes a layer of sweat to stay with you the whole day.

We arrived to the government buildings at 8:30 am and made our way to the corridor where the courts are located. People were coming and going in all directions: social workers, lawyers, prisoners and their guards, families of the accused headed with purpose to all corners of the building.  We entered the courtroom and I was reminded of all the trials I had seen in TV soaps over the years, although the judge wore a simple black robe rather than the pretentious wigs I’m so used to seeing at home. 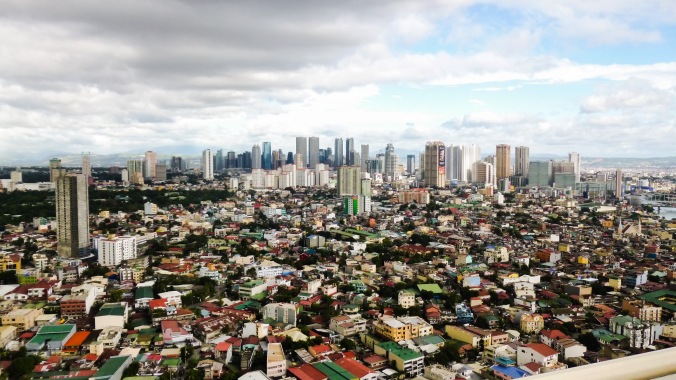 Looking out over Mandaluyong City, towards Makati City where we spent our day in Manila

The boy we were with was charged with being caught up in a petty theft. The incident happened almost two years ago and has been delayed and delayed because the complainant and witnesses have never shown up to court. This boy’s life for the last two years has consisted of him waiting and waiting and he has not been able to move on, re-integrate himself into his community (which has all but shunned him) and get back into education to finish his studies. Thankfully, the PREDA Foundation was able to transfer him from the government facilities (where waiting for two years would be a genuine nightmare) and provide legal support, a positive and friendly environment to live, and counselling to help him when he moves on once the seemingly never ending trial is over. He has shown impeccable behaviour since moving to the Boys’ Home.

In the afternoon, we visited the homes of four of the boys currently staying at the Boys’ Home; or at least that was the plan! One of the parents was supposed to be at the local basketball court, but he didn’t show up. A mother of one of the other children was at work, so we had to go to her street food cart and talk to her there. In the third boy’s home, we were greeted by two barking shih tzus but no parents. After some questions, it turned out he lived there with is brother, auntie and three cousins; I was left unsure as to what happened to his parents.

Finally, we visited the home of the fourth boy. When we arrived, his mother was sat on a deckchair with his seven-month-old brother down a side alley of a house. His grandfather, who the three also lived with, went to fetch a bench for us to sit on. When he returned, we asked him where the home was, to which he simply replied, “it’s here” pointing towards the narrow area that we were all standing in. Their home consisted of an area no larger than a metre wide and 3 metres long, opposite bags of garbage and cardboard. The grandfather had to fold up the deckchair in order for us to sit on the bench in the 3 square metres that this family called their home.

They had previously rented an apartment, but they couldn’t afford to pay the rent so they moved onto the streets. Each day they are forced to pay for some food elsewhere, as there is no space to cook for themselves. The area was hardly a shelter either, as it started to rain very heavily and the tarpaulin covering the alley leaked water onto our shoulders as we sat below and talked to each other. Many of the local children enjoyed stripping off their clothes and dancing in the rain; some even had soap with them and took the opportunity to shower. A joyful moment for the children living in such offensively cramped conditions.

After chatting to this family, who welcomed us so warmly, we visited a government home for boys to collect four new children who had been abandoned by their families and are accused of petty theft to survive on the streets; an all too common case in the stories of these young people who are jaded with life because of their family circumstances. A vicious cycle of behavioural problems because of a lack of love in life, which causes further behavioural problems causing the attitude and outlook of the young people to sink further and further into chasms of darkness. It is this cycle that PREDA social workers are trying to break by taking in the young people who can hopefully turn their lives around after experiencing the holistic approach of the Boys’ Home which is appropriately nicknamed, “Childhood for Children”. 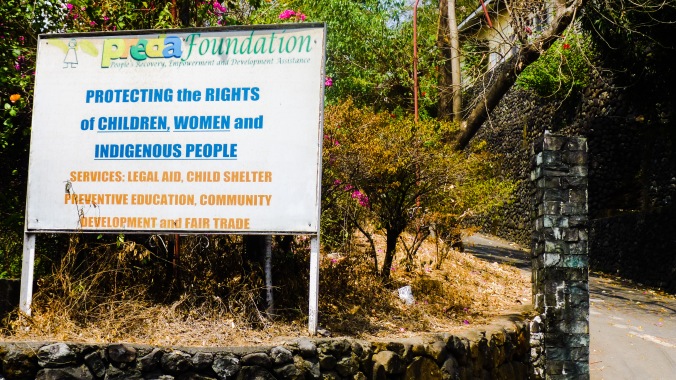 We arrived back in Olongapo after 11 pm. A long, 20-hour day which helped me to understand in more detail some of the problems that are facing the people of the Philippines as well as the issues facing PREDA. I returned to my room here at the Preda centre, and couldn’t help but think about how many lives the operations from within these walls have helped save. It could be said that PREDA is fighting a losing battle in a country that is gripped by corruption, nepotism and poverty. There will always be street children as long as there’s poverty and there will always be sex tourism as long as foreigners are coming and spending money in bars. However, in spite of this, if it weren’t for the activity here at PREDA, hundreds – maybe thousands – of children wouldn’t have the lives they are living now: empowered, motivated and loved.

The centre is not just a building, and not just the headquarters for the work of this organisation, but is a sheer beacon of light looking out over a city and country that is filled with so much darkness and depravity. We are all called to be salt for the earth, to cleanse and purify, to restore justice and dignity to people who are deprived of theirs. It would be pointless to sit quietly – like flavourless salt – and do nothing.

The PREDA Foundation has an important mission, and it burns brightly aloft this hill. The exposing light is here for everybody to see; anybody who is involved in crime and corruption can see this crucial place from all over the city. It is not hidden, it is in plain sight. All the staff (some of whom were rescued victims and successful PREDA boys and girls themselves) are committed and working tirelessly to ensure that the flame will never go out, ensuring that there will always be a place in this world for the vulnerable and marginalised who are given such a terrible start in life. The urgency never ends.